As a consequence of Henry VIII’s break with Rome, Catholics in England were deprived of their full rights as citizens: it was not until 1829 that these rights were fully restored. For much of this period, Catholics were dependent on missionaries, accommodated in the houses of recusant families who used these ‘mission stations’ to travel to places where there were small communities of Catholics. A local historian, Mrs Bryan Stapleton, refers to such a mission at Woodstock ‘laid down by Father R. Blunt, SJ, for the periodical visits of the Jesuits.’ Another Jesuit, Father Charles Leslie, who lived with a Catholic family at Waterperry, said Mass there and in Oxford on alternate Sundays and occasionally visited Woodstock. Mrs Stapleton records that early in 1905, some Sisters of Providence from the  archdiocese of Auch in France took a small house in Kidlington. The Archdiocesan Directory for 1906 records that on May 25, 1905 ‘Mass was celebrated in Kidlington for the first time since the Reformation in the Sisters’ Oratory’. No record remains of where that was. The celebrations of the Mass continued during the summer until they left to settle at Woodstock.

In 1897, St Philip’s, the chapel of the Servite Priory, was opened at Begbroke. The only other church within the easy reach of Woodstock and Kidlington was St Gregory and St Augustine, founded in 1912 in Woodstock Road, Oxford, to serve the Catholic community in North Oxford and Wolvercote. With the lack of ample transport facilities as today, few people from those areas were able to make the journey.

The parish priest of North Oxford church, Father William Smith played a crucial role in creating our parish. He was approached by Lady Mary Terry who lived at Haddon House, No18, Park Street, Woodstock, with a list of names of the 60 Catholics whom she could identify living in Woodstock. She implored him that They needed a Mass centre and offered a building to house it. Father Smith obtained permission from the archbishop of Birmingham for the Mass centre and was able to say the first public Mass in Woodstock in the spring of 1931 with a congregation of a dozen. Father Smith could not serve the new Mass centre regularly but an arrangement was made with the Jesuit College at Hythrop to send a priest on Sundays during term time.  After Lady Terry’s death in January 1931, Masses ceased for a time but later that year they were restarted through the generosity of the Haddon House trustees. When the house was sold in 1933, Masses once again came to an end but the new owner gave permission for the hut to be used for Masses on Sundays, Mondays and holy days. But it was clear that the hut could only be a stopgap. The congregation had to put up with many inconveniences due to the poor infrastructure of the hut.

Meanwhile Father Smith found the site for the present church, then an allotment and bought it for £180 and ownership was conveyed to the archdiocesan trustees. The archbishop appointed the Birmingham firm of Harrison and Co. as architect. The builders were Grove Brothers of MiIton-under-Wychwood, using stone from Chadlington near Woodstock. In 1933, Father Stephen Webb, SJ, was appointed as the first parish priest. The official opening and blessing of the church took place on June 17, 1934 on a glorious summer day. The ceremony began with the blessing of the church and the school by the Archbishop of Birmingham, the Most Rev. Thomas Leighton Williams, assisted by Father E. Helsham, SJ, Rector of Heythrop; and Father Carey, SJ, of the American Province. The church was built to seat 107 people but about 150 crowded into the building for the Mass.The first four rows were occupied by the children of the recently inaugurated school, in their Corpus Christi uniforms, together with Sister Agnes and Sister Mary Joseph, the Notre Dame nuns who taught them. The dedication to St Hugh had been suggested by a Woodstock parishioner, Mrs Parry Eden, on the ground that he was the only saint known to have any connection with Woodstock.

The school preceded the church. When Father Webb took charge of the parish in 1933, the building of the church was already under way but he immediately recognised the need for a Catholic school. In February 1934,  April 23, the school opened with 43 pupils but was soon enlarged to accept 55 children. The two Notre Dame Sisters, Sister Agnes and Sister Mary Joseph, both qualified teachers, made the journey between Oxford and Woodstock everyday by bus without claiming any expense or salary.  the school had to be shut down in 1945 after 11 years of operation.

A church for Kidlington

Although the exact date of the first Mass in Kidlington is unknown, it is clear that no more than a few months separated the return of the Mass to the village where a  new Mass centre was opened in 1935. Father Webb evidently recognised that the village already had a larger population than the town. To gauge the level of likely support for a Mass centre at Kidlington, Father Webb organised a children’s party at Foresters Hall. Encouraged by the response from local people, he began to look for a suitable site on which to establish a Mass centre. Eventually Father Webb bough a field where the present church and school now stand on the main Oxford Road and set about building a parish hall that would double as a Mass centre. This building was to serve the Catholics of Kidlington for 30 years. Like the present church, the hall church was dedicated to St Thomas More. In its early days, the hall was a wooden-floored structure containing only the bare necessities. In winter, to prepare for Mass on Sunday morning, the fire had to be lit on Saturday evening for the heating. It was a tedious process as the lighter had to beat a hasty retreat as the stove was liable to belch clouds of black smoke. It had to be banked up late in the evening to ensure that it stayed alight all night; then in the morning the hall had to be ventilated to let out most but not all of the smoke that remained. While this process took the chill from the hut, it did not prevent the outside toilet from freezing. Families have memories of arriving for a baptism only to find the Holy Water frozen; the priest overcame this by bringing his own supply kept warm in his pocket.

The hall church cost £750 to build and that, together with £500 still to be paid on the school building at Woodstock, left the parish with a debt of £1,250 on which interest had to be paid. Members of the parish rallied round, running a variety of social events to raise funds to pay off the debt.

With the church in the middle of a field, the approach from the road was a muddy bath in wet weather. This was overcome when Walter Cowley and some of the men of the parish laid a narrow concrete path that can still be seen on the North side of the church. St Thomas More’s is first listed in the Catholic Di rectory for 1936 where it is described as a ‘Church Hall, founded in 1935, served from Woodstock’. Sunday Mass was at 10 a.m. with an evening service at 7.45, changed to 4.30 from 1937. On Mondays and Holydays of Obligation there was a Mass at 7.30. Confessions were before Mass.

A home for the Priest

Shortly before he left the parish Father Webb had secured the tenancy of No.4, Hensington Road, next to the Woodstock church, as a home for the priest. The rent was £1 per week that had to be paid in addition to the £1 interest on the outstanding loan. In 1937, 23 Hensington Road became the parish house in which all parish priests lived until 1955 when the presbytery was built at Kidlington. Father Gerald Adams, the first priest to live in Woodstock, furnished the house. Around the time of the outbreak of the war in September 1939, Father Adams left the parish and was succeeded by Father Anthony Kane. It is as a result of Father Kane’s curiosity about the origins of the mission that the surviving parish archives include a record in Father Smith’s own hand of its beginnings.

During the 1940s there was a fairly rapid turnover of parish priests. After only 2 years in the parish, Father Adams left the area around the time of the outbreak of war in 1939. He was replaced by Father Anthony Kane who also served the parish for two years before he, too, was replaced by Father Edward Kilgallon. During the early years of the parish some income came from what were described as ‘bench rents and door receipts’. These brought in £13 12s. in 1938 but appeared to have been discontinued by 1943. The record shows a Catholic population in the parish of 120 of whom 65 were present at Mass, 35 in Woodstock and 30 in Kidlington. The diocese, which was still looking into the future, bought a piece of land on the other side of the church at Woodstock so that there should be sufficient room to build a presbytery should the needs arise- and funds permit. This is the site now occupied by St Hugh’s House that has been the home of the episcopal vicars and more recently of the Rt. Rev. William Kenney, area bishop for this part of the archdiocese. In 1944 Father Kilgallon was transferred to Chipping Norton. His replacement, Father Gordon Hunter was here for about twelve months until he was in turn succeeded by Father Guy Coleman who remained until 1947. Thus the parish had had six priests in the thirteen years of its existence: the reason for so many changes were unknown but Karen Gackowski speculated that perhaps the poor mission was seen as good training for a priest before he moved on to a more affluent parish. Father Coleman stayed in the parish for 2 years and was succeeded by Father Thomas Burbage .

In 1963, shortly after Father Francis Dudley became parish priest, permission was given for a new school, this time at Kidlington. Father Dudley also introduced the Planned Giving envelope scheme to the parish, resulting in a three-fold increase in parish income. The school opened on January 14,1964 with 80 pupils, 46 boys and 34 girls, whose ages ranged from 5-11 years. The first head teacher was James Foley and the school had 3 classrooms.  The school had a steady progress and soon the growth of the school caused serious thought to be given to replacing the temporary building that had served as both church and school hall with a permanent structure.

The construction for the new church  was completed and ready for use in March 1968 although in 1981, the roof had to be replaced with a simpler, more maintenance-free structure. The first Mass was celebrated on Holy Thursday 1968. The school was also expanded at the same time to have a new assembly hall in addition to a dining hall , new classroom, staff room and offices and to accommodate 200 children. In 1974, the parish benefited from a legacy of Mrs Geraldine East, of Kirtlington, who left £4,418, sufficient to clear the debt on the debt on the church.   The consecration of the church  was performed by Archbishop Dwyer on June 22, 1976. At the consecration, a scroll signed by the archbishop and a reliquary containing a relic of St Cuthbert Mayne, martyr, were sealed into the altar.

OUR PARISH PRIESTS TILL DATE

Confirmation – We Welcome the Archbishop 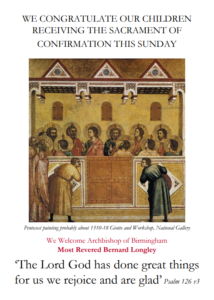 Copyright © 2022 Catholic Parish of Kidlington and Woodstock. All Rights Reserved. Theme by ILOVEWP